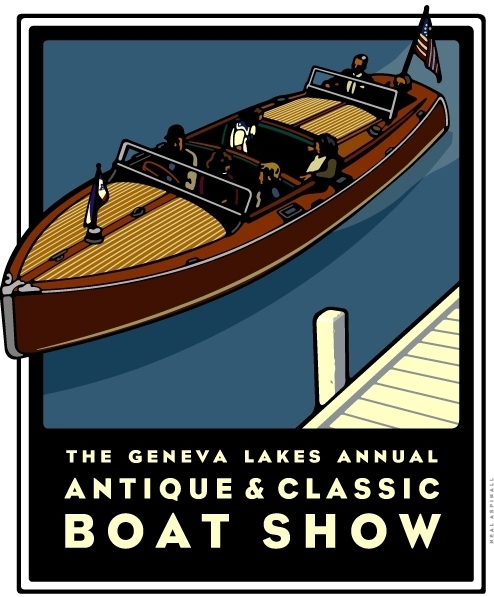 Who says 13 isn’t lucky? In the 13 years since we’ve had the Geneva Lakes Antique & Classic Boat Show at the Abbey in Fontana Wisconsin, I don’t remember ever having three perfect weather days for it. The predictions of sunny with temperatures in the 70’s rang true, and it was a fantastic weekend for boating and hanging out sharing stories.

Also lucky were the Friday passengers in the pre-show event. The Estate Tour and Cruise is an annual favorite, and sells out quickly. The overwhelming early response was answered with additional tours being added on, which kept the Sea Lark, Polaris, and steam boat Louise busy ferrying passengers all day. It was a delightful day! At each of the three estates that we visited, our gracious hosts, Dean and Rosemarie Buntrock, Bertil and Ulla Brunk, and Bonnie Deutsch and Joe Kinnebrew shared their homes and their stories as our eyes feasted on the gorgeous gardens, unique art, amazing collections, the ultimate man cave, and fantastic views from the large but warm and cozy rooms and patios of their homes. The feast continued at the Lake Geneva Country Club as we enjoyed a delicious buffet lunch before returning to the Abbey.

The show attendees spent the rest of the afternoon getting themselves settled into the hotel; and their boats into their assigned docks, or relaxing either harborside, in the Abbey spa or at the pool. The Blackhawk Reception Dinner on Friday evening was held at Pier 290, the new lakeside restaurant at Gage Marine. Diners came by boat or car, and socialized at the outside bar, taking in the view of the lake at sunset, lounging in comfortable chairs near the fire pits. Dinner was served in the warehouse which had been transformed into a private boating-themed banquet area for us for the evening. A slide show presentation of photos from the Estate Tours entertained us during the meal, followed by presentations by Blackhawk President Mark Svoboda, then Pier 290 and Gage Marine owner, Bill Gage. The Blackhawk Youth Group began selling raffle tickets to help fund their group project boat. The drawing was held on Sunday for prizes of an iPad, a landscaping consultation and also a weekend at the Abbey.

Saturday morning greeted the show participants with abundant sunshine, coffee and rolls in the Harbor House, and friendly volunteers at the registration desk, launch ramp and at the show Sales and Information tent. There was a large array of tents on the lawn with artisans displaying their work for viewing pleasure and sale. Live music along with food and beverages graced the patio area. The Youth Group, sporting ‘JUDGES’ blue shirts and red hats from Hagerty Insurance, traversed the docks with ballots in hand in search of their favorite boat at the show. All the Captains (sans the judging outfits) were encouraged to follow suit to decide on their favorites from several categories. There were over 80 boats at the docks and more than 20 on land. Winners chosen by captains were announced at the Awards Dinner Saturday evening in one of the Abbey ballrooms. Thousands of spectators viewed the boats throughout the two day show. The Streblow company continued the tradition of taking spectators for thrilling rides out on Geneva Lake. Another crowd favorite is always the “Start your engines” and ensuing boat parade when the spectators can experience the sights and sounds of all those wood beauties heading out to the lake.

A Cocktail Reception got the Awards Dinner off to a start, with a slide show presentation throughout both showcasing all the boats and show activities. Steve Horton of Streblow Custom Boats narrated a slide presentation in tribute to Randy Streblow, who passed away recently. Awards and accolades were presented to the winning boat owners and people who contributed their time and talents to the Blackhawk Chapter throughout the year and to produce this large, comprehensive show. The dinner concluded with a raffle drawing with top prizes of a $1,900 watch accompanied by a model wood boat, and a $500 jewelry gift certificate. Awards are listed on the next page.

The most momentous event of the three days for many of us occurred at sunrise on Sunday. It was a chilly morning; our boat windshields were frosted, but our hearts were warm with memories of Randy Streblow. Forty eight Streblow boats gathered at the Fontana end of Geneva Lake to pay tribute to this wonderful man and the amazing legend he created in his lifetime. As the sun appeared above the trees on the east coast of the lake, we began our memorial cruise, side by side to “Wake the Lake”. There is no doubt that Randy was loved and respected; he will surely be missed, and never forgotten.

Back at the docks Sunday, we were blessed with another sunny, warm day. The show closed with everyone gathering on the lawn hoping to hear their name called as either winner of the People’s Choice Award, or one of the Youth Group raffle prizes.

The Blackhawk Chapter would like to thank all the show participants and the volunteers for coming and making this such a fabulous show! Thank you also, to the many sponsors, most notably, The Abbey Resort and Spa, The Abbey Marina, Gordy’s Marine, Gage Marine, Razny Jewelers, Ryco Landscaping, Lisa Byrne & Baird & Warner Realtors.